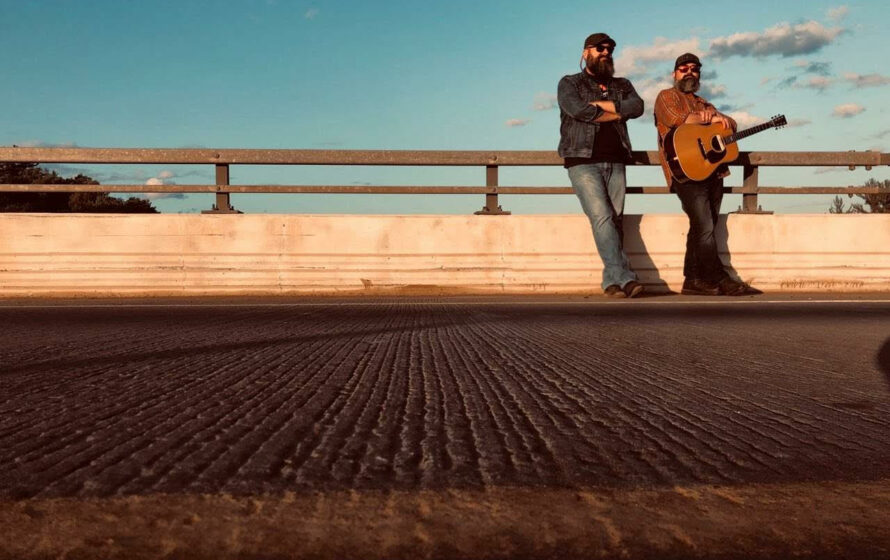 Adam and Bill‘s friendship was forged in the trout streams of Michigan and evolved over time as a dynamic songwriting duo.  Many of the songs they perform together, both with and without their respective bands, were collaborations both over long distance, and on the side of a river when possible.
Adam Carpenter
The rugged shores of Lake Superior and wilderness of Michigan’s Upper Penninsula have had a profound effect on Adam Carpenter’s songwriting.  He has been writing songs for over 30 years and has spent 19 years performing many of his songs with the bluegrass band, Chasin’ Steel, and still does on occasion.  But a new chapter has started in Carpenter’s music career.  He now fronts an “original frostbitten country” project called, ADAM CARPENTER & the UPPER HAND to bring to life his songs that fit more into the country music realm.  The influence of da U.P. is evident in Carpenter’s writing, with references to streams, The Gitch, fly-fishing, hunting dogs, and the harshness of winter incorporated with the average human experience such as love, heartbreak, and finding peace in this crazy world.

Bill Arnold is a songwriter based in Clarkston, MI. He currently fronts the band One Ton Trolley, which features his songwriting. His are thoughtful songs steeped in the Midwest narrative, collectively defying the label of genre, yet individually providing a comfortable ride for the listener. His writing conjures imagery of hardworking folk from all walks of life, people who toil relentlessly, but humbly and merrily: on their craft, their work, their art, their leisure, and their relationships.

Arnold is also known as a Dobro and lap steel guitar player and can be found on stages and recordings in that capacity with area and regional artists such as Chasin’ Steel, Adam Carpenter & the Upper Hand, Bill Bynum & Co., Buffalo Knickels, Levi Bootcut & the Straight Legs, and the Robert Louis Band.

When not pursuing music, Arnold remains busy with his family, and occasionally drifting flies over trout on his beloved Manistee River near Grayling, MI.