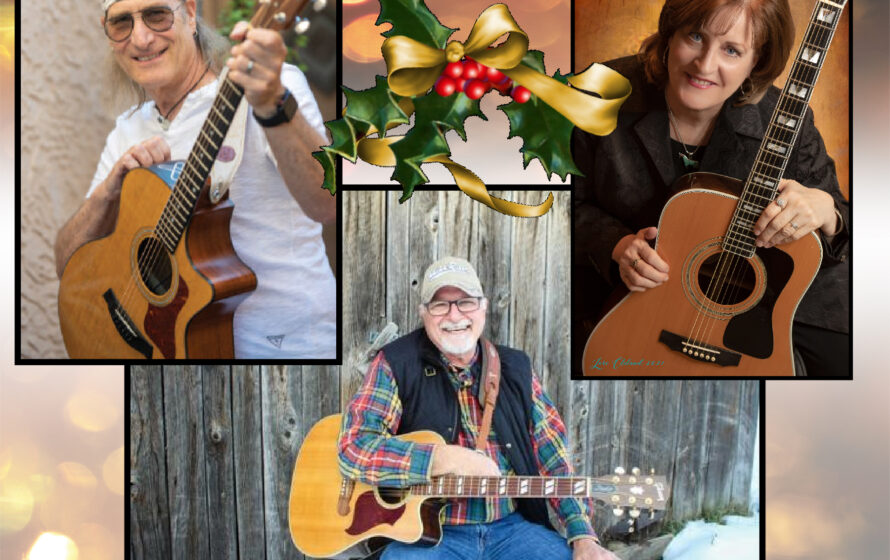 Lori Cleland has been performing for live audiences since the age of 16. Her love of folk music led her to three best friends who together formed the all-women acoustic folk music quartet, Just Friends. They performed at a variety of venues for over three decades. Along with performing, Lori’s passion for music naturally led her into teaching. She taught private music lessons for many years and then moved to the public schools as an elementary music educator in the Lake Orion and Farmington, MI. school districts. In 2016 she retired from her 20-year teaching career and moved to Cheboygan. During her experience with Just Friends Lori had the privilege of performing concerts and conducting workshops in Michigan and many other states. These venues included libraries, schools, coffeehouses, historical sites, weddings, live radio shows such as CKPE (Nova Scotia), WKRN (Kalamazoo) and WDET (Detroit) as well as several Christmas performances for the prestigious “Brunch with Bach” series at the Detroit Institute of Arts. Just Friends also performed at several festivals which included the Philadelphia Folk Festival, Old Songs Festival in New York, the Madison Folk Festival in Wisconsin, and several appearances at the Southeastern Dulcimer Festival in Hastings, MI, just to name a few. Through Oakland University in Rochester, MI Lori obtained a Bachelor’s degree in Music Education and Vocal Performance followed by a Graduate Degree in Music Education. She was also a part of many performances at Oakland University. Although she has been fortunate to have had many memorable performing experiences one that topped the list was performing in a 165-member choir with Luciano Pavarotti for the gala opening of the Detroit Opera House in 1996. Lori produced her own recording, Caribou Lake Song, and has two recordings with Just Friends…Here’s to Song and A Dulcimer Holiday. Just Friends was also included on the CD, Song for the Mira, which is a collection of songs written by Canadian composer Allister MacGillivray. Their version of Allister’s “Here’s to Song,” had closed the Celtic Serenade Radio Show on CKPE in Nova Scotia for over 30 years! Since retiring Lori has regularly performed for the Queens Head Wine Pub in Cheboygan and as well as for the 40 Mile Point Lighthouse, the Rogers City Theatre, the “Play the Carnegie” series in Cheboygan, the Cheboygan Public Library, along with private and fundraising events. During the COVID 19 pandemic Lori wrote “Hey, Little Bird” and “The Cheboygan River Song” which now have accompanying books with the lyrics to the songs and Lori’s own photographs. Lori is proficient on several instruments including the piano, acoustic guitar, 5-string banjo, ukulele, mountain dulcimer, and has a love of the Native-American flute. Although she is passionate about her ability to play instruments, her main instrument and favorite of all is singing! In her retirement she has been getting back to her folk-singing roots and has come full circle. Lori resides in Cheboygan with her wonderful and supportive husband of 44 years, Bill. She loves her family, nature photography, boating, sewing, knitting and crocheting.

The combination of these accomplishments, and performing with an array of world class musicians, has earned him a reputation as a top caliber guitarist.  Well versed in all styles of playing, Duffy is best known for his potent Jazz/Rock and R&B/Funk chops.

Duffy’s talent doesn’t stop with playing guitar. His song writing skills have won awards in Billboard Magazine’s Songwriter’s Contest, and received acclaim for his solo release, Livin’ for the Big Time, which charted in the top 10 on many radio stations throughout the mid-west region.

Mike Ridley is known throughout Michigan for his great live performances in popular local taverns. This talented musician’s song parodies are always well crafted and highlight his musicianship. His interactive music sets have been known to be the life of the party. It is always a night to remember when Mike Ridley is in town. Want to hear the parody song that fits your city and/or your college? Want to have some good laughs and hear some good music? Ridley is your Michigan Man. Get your Attitude Checked here!